The World's Most Demanding Pilot Organisation standardises on the ADX PPU from AD Navigation.

In ports around the world, the increasing volume of ship traffic and ever larger ships means that harbour management is progressively more challenging. At the same time, the focus on efficiency and safety intensifies.

To cope with the increasing complexity of the pilot's daily work, the Dutch Pilot Organisation clearly understood the need for modern pilots to be equipped with electronic navigation aids that employed innovative and portable technology. Such aids were seen as valuable additions to the pilot’s toolbox, enhancing their services to the customer. Over several years, different PPU systems were evaluated to find the optimal solution to assist the Dutch pilot during approach and docking. Pilot defined criteria included:

In order to quantify the performance and features of the PPU, the Dutch Pilot Organisation developed a detailed Site Acceptance Test (SAT) protocol. The SAT is based upon the guidelines above, and knowledge of GPS and gyro technology capabilities. The SAT includes the following headlines:

Subsequently, the ADX PPU from AD Navigation was tested for nearly 1000 successful hours in all kinds of test and "real-life" operational scenarios. The system is 100% compliant to the SAT protocol. As a result the Dutch Pilot Organisation is standardising on the ADX PPU! 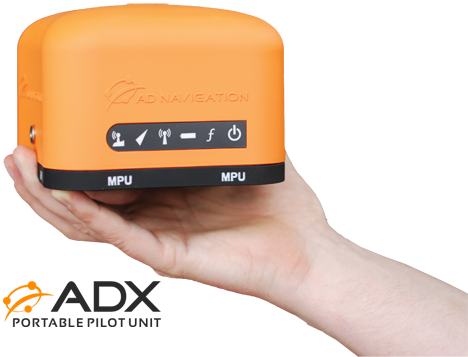